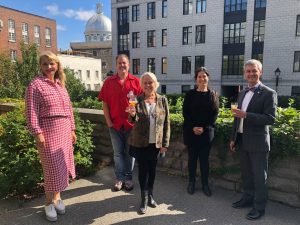 Guidatour is a proud partner of the event Montréal centre-ville brassicole culturel gourmand. We are presenting two exclusive new walking tours as of October: East of the Main: Beer and Murals and Griffintown: Beer and the Industrial Revolution. Don’t miss it!

These 4-hour beer tours led by a professional guide include tastings at different locations.

East of the Main: Beer and murals Tour

During the East of the Main: Beer and murals tour, be amazed by the richness of the works of art and the delicious beers of the area. This visit combining beauty and pleasure starts near the location of Brasserie Ekers, on Saint-Laurent boulevard. Go through the area of the Graffiti Festival Under Pressure, the Habitations Jeanne-Mance and the Quartier Latin with our professional guide. End with a short incursion in Quartier Centre-Sud. See over twenty murals of all kinds and spend a pleasant afternoon, full of color and lightness.  The tour will be completed by a visit to these three breweries:  L’Amère à Boire, Le Cheval Blanc and Saint-Houblon.

During the walking tour Griffintown: Beer and the Industrial Revolution, see how Griffintown is changing before our very eyes. From a light industrial zone with many empty lots, it is turning into one of the city’s most sought after residential districts. Visit its streets with your professional guide and witness this unique moment in the neighbourhood’s history. You’ll learn about the area’s rise to prominence during the 19th century, its largely Irish population, and how it became a major player in the brewing industry with the arrival of the Dow brewery. This tour, filled with discoveries, features stops at the following breweries: Brasseur de Montréal, 4 Origines, and Bistro-Brasserie Les Sœurs Grises.

Schedule and reservations for the beer tours